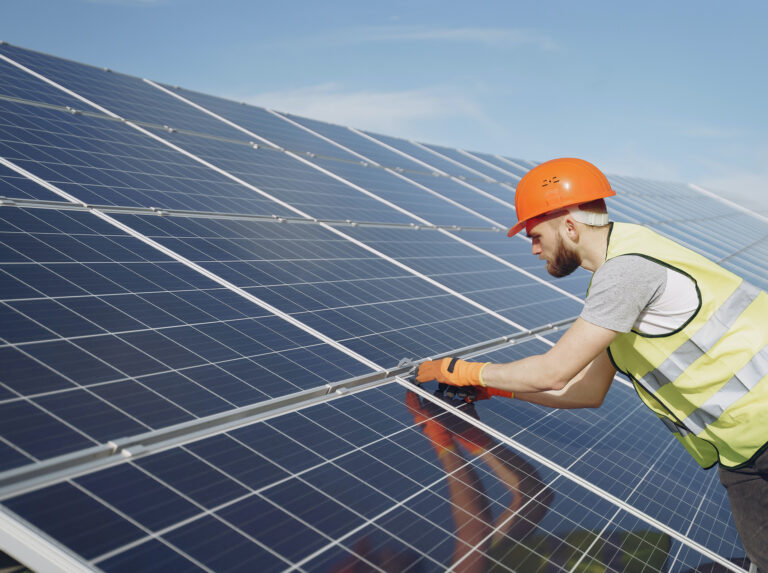 Do you need an expert company to install your system – or
would you like to retrofit a storage unit but not install it
yourself?

We are happy to support you with our expertise and offer
you professional assembly and installation – both
nationwide and throughout Europe!

In short:
The most important
things at a glance

Before the installation can be implemented, there are two important steps: the assessment and dimensioning of your roof
surface.

Based on this data, we determine (naturally taking into account the wind load and statics of your roof) the exact design of
the modules, as well as the number required to cover your needs.

After final consultation, we then install the substructure on your roof, ground it and fit it with the previously determined
modules. After these have been connected (“strung”), it is now a matter of laying these strings/circuits up to the house
connection room.

For a sustainable future -
your solar project in the best hands

Important facts on the subject of solar system assembly

For solar energy to be transformed into usable electricity, the following four main elements are needed:

In addition to various cables, an electricity meter is also required.

If your system is installed by a specialist company, the solar components are usually not provided and installed individually, but in the form of a complete system.

In general, it, therefore, makes little sense to buy solar modules or other components of the system individually, as each component must be coordinated with the others.

The mounting options for solar systems are as unique as the individual circumstances they are used in. For example, a solar system can be installed not only on the roof of a house but also on the garage, the house façade or even extensions – such as conservatories.

Nevertheless, it is often the case that the installation of the system on the roof of the house is the most profitable and should therefore be examined more closely first. There are adapted installation concepts for flat and pitched roofs:

Even if people often mistakenly assume the opposite, flat roofs are ideal for the installation of a solar system. The solar modules are elevated and optimally oriented towards the south.

Incidentally, a distinction is made between two variants of flat roofs:

Fortunately, there are also fastening systems or plastic tubs that are weighted down on the roof so that the roof cladding is not damaged. However, since in this case the roof’s statics are more heavily loaded, this option is not suitable for every roof.

If necessary, a façade installation can be considered. However, it is important to ensure that there are no possible shadow sources around the façade that could reduce the amount of light received.

There are two types of facade installation:

Get in touch with us!